The Road to Totalitarianism

CJ Hopkins breaks down what's happening around the world. We need to pay attention as it's going to happen in the United States as well.

Editor’s Commentary: Generally, we only publish articles relevant to the United States on this site. This is one of them even though the examples used by CJ Hopkins are from Europe and Australia. The rising totalitarianism around the globe is foreshadowing what’s going to happen in America. In fact, it already is.

As he states, it’s not becoming of us to go “Braveheart” on everyone and offer inspiring speeches about how “they cannot take our freedom!” But here’s the thing. We’re there already. We have to stand up and be counted for opposing the path this nation and the world are on or we will be relegated to the graze among the sheep waiting for permission from government to do anything at all.

The hour is late. The time to act was yesterday, but that doesn’t mean we shouldn’t get going now. Better late than never, right? With that said, here’s CJ Hopkins…

The Road to Totalitarianism

People can tell themselves that they didn’t see where things have been heading for the last 17 months, but they did. They saw all the signs along the way. The signs were all written in big, bold letters, some of them in scary-looking Germanic script. They read …

“THIS IS THE ROAD TO TOTALITARIANISM.”

I’m not going to show you all those signs out again. People like me have been pointing them out, and reading them out loud, for 17 months now. Anyone who knows anything about the history of totalitarianism, how it incrementally transforms society into a monstrous mirror image of itself, has known since the beginning what the “New Normal” is, and we have been shouting from the rooftops about it.

We have watched as the New Normal transformed our societies into paranoid, pathologized, authoritarian dystopias where people now have to show their “papers” to see a movie or get a cup of coffee and publicly display their ideological conformity to enter a supermarket and buy their groceries.

We have watched as the New Normal transformed the majority of the masses into hate-drunk, hysterical mobs that are openly persecuting “the Unvaccinated,” the official “Untermenschen” of the New Normal ideology.

We have watched as the New Normal has done precisely what every totalitarian movement in history has done before it, right by the numbers. We pointed all this out, each step of the way. I’m not going to reiterate all that again.

I am, however, going to document where we are at the moment, and how we got here … for the record, so that the people who will tell you later that they “had no clue where the trains were going” will understand why we no longer trust them, and why we regard them as cowards and collaborators, or worse.

Yes, that’s harsh, but this is not a game. It isn’t a difference of opinion. The global-capitalist ruling establishment is implementing a new, more openly totalitarian structure of society and method of rule. They are revoking our constitutional and human rights, transferring power out of sovereign governments and democratic institutions into unaccountable global entities that have no allegiance to any nation or its people.

That is what is happening … right now. It isn’t a TV show. It’s actually happening.

The time for people to “wake up” is over. At this point, you either join the fight to preserve what is left of those rights, and that sovereignty, or you surrender to the “New Normal,” to global-capitalist totalitarianism. I couldn’t care less what you believe about the virus, or its mutant variants, or the experimental “vaccines.” This isn’t an abstract argument over “the science.” It is a fight … a political, ideological fight. On one side is democracy, on the other is totalitarianism. Pick a fucking side, and live with it.

Anyway, here’s where we are at the moment, and how we got here, just the broad strokes.

It’s August 2021, and Germany has officially banned demonstrations against the “New Normal” official ideology. Other public assemblies, like the Christopher Street Day demo (pictured below), one week ago, are still allowed. The outlawing of political opposition is a classic hallmark of totalitarian systems. It’s also a classic move by the German authorities, which will give them the pretext they need to unleash the New Normal goon squads on the demonstrators tomorrow. 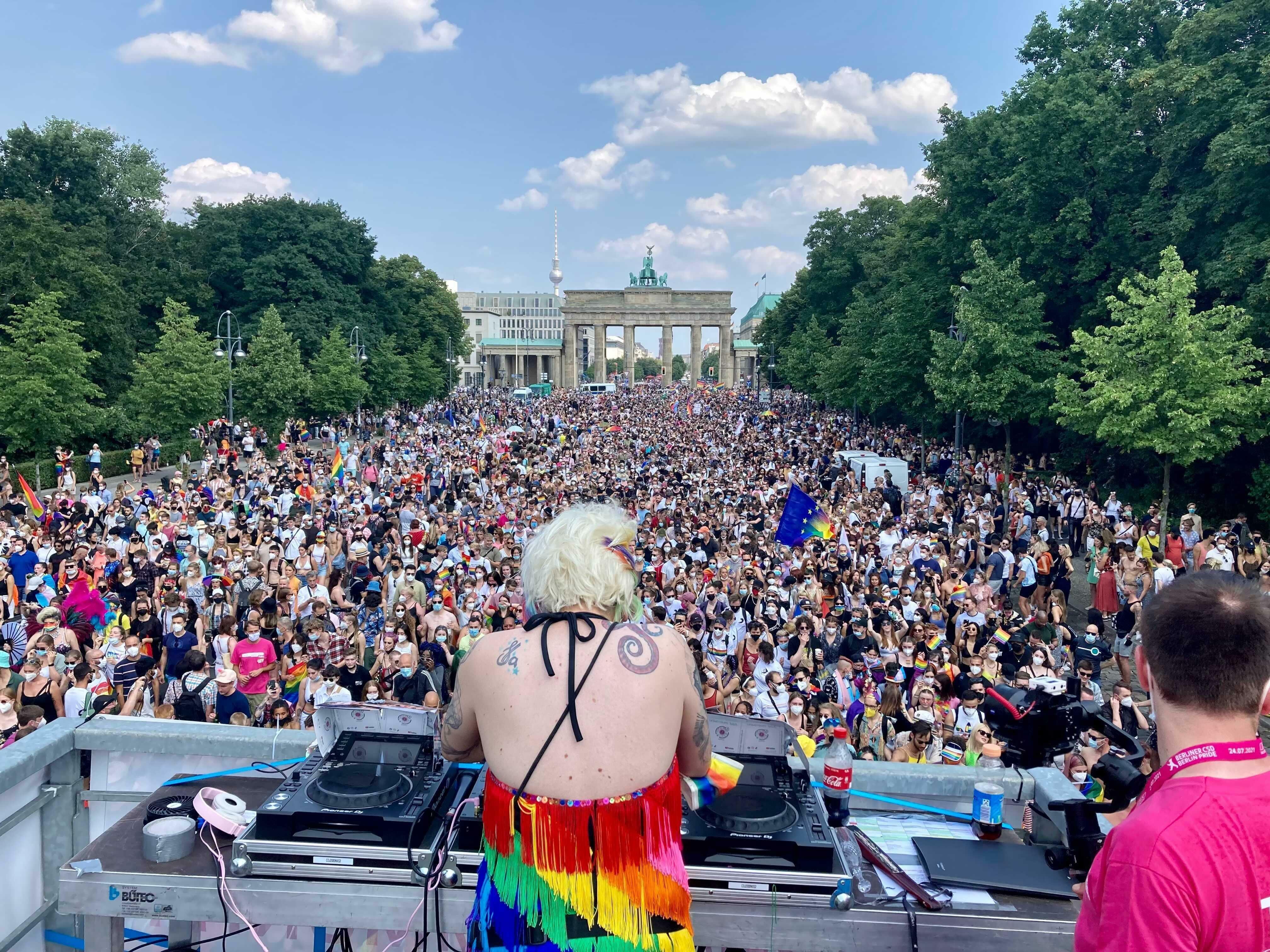 In Australia, the military has been deployed to enforce total compliance with government decrees … lockdowns, mandatory public obedience rituals, etc. In other words, it is de facto martial law. This is another classic hallmark of totalitarian systems.

In the UK, Italy, Greece, and numerous other countries throughout the world, this pseudo-medical social-segregation system is also being introduced, in order to divide societies into “good people” (i.e., compliant) and “bad” (i.e., non-compliant). The “good people” are being given license and encouraged by the authorities and the corporate media to unleash their rage on the “the Unvaccinated,” to demand our segregation in internment camps, to openly threaten to viciously murder us. This is also a hallmark of totalitarian systems.

And that, my friends, is where we are.

We didn’t get here overnight. Here are just a few of the unmistakable signs along the road to totalitarianism that I have pointed out over the last 17 months.

And now, here we are, where we have been heading all along, clearly, unmistakably heading … directly into The Approaching Storm, or possibly global civil war. This isn’t the end of the road to totalitarianism, but I’m pretty sure we are in the home stretch. It feels like things are about to get ugly. Very ugly. Extremely ugly. Those of us who are fighting to preserve our rights, and some basic semblance of democracy, are outnumbered, but we haven’t had our final say yet … and there are millions of us, and we are wide awake.

So pick a side, if you haven’t already. But, before you do, maybe look back at the history of totalitarian systems, which, for some reason, never seem to work out for the totalitarians, at least not in the long run. I’m not a professional philosopher or anything, but I suspect that might have something to do with some people’s inextinguishable desire for freedom, and our willingness to fight for it, sometimes to the death.

This kind of feels like one of those times.

Sorry for going all “Braveheart” on you, but I’m psyching myself up to go get the snot beat out of me by the New Normal goon squads tomorrow, so I’m a little … you know, overly emotional.

Seriously, though, pick a side … now … or a side will be picked for you.

All ORIGINAL content on this site is © 2021 NOQ Report. All REPUBLISHED content has received direct or implied permission for reproduction.

With that said, our content may be reproduced and distributed as long as it has a link to the original source and the author is credited prominently. We don’t mind you using our content as long as you help out by giving us credit with a prominent link. If you feel like giving us a tip for the content, we will not object!